Obsessive-compulsive disorder (OCD) is a disorder characterized by uncontrollable, recurring thoughts and behaviors. About 2% to 3% of people experience OCD, yet standard treatment such as medicine or exposure therapy achieves (partial) response in only 40% - 60% of the patients. In May 2019 a new treatment was approved by the U.S. Food and Drug Administration (FDA) for those patients not responding to standard treatment: high-frequency deep transcranial magnetic stimulation (dTMS).

An international research team led by Joseph Zohar, M.D. of Tel Aviv University found out that dTMS treatment delivered five times a week over a 6 weeks period was superior to a placebo version of dTMS in reducing patients’ OCD symptoms. The research group focused on targeting the medial prefrontal cortex (mPFC) and the angulate cingulate cortex (ACC) with dTMS to find out whether stimulation of these brain regions would significantly reduce OCD symptoms. Both the patients receiving active treatment as well as the patients receiving placebo treatment reported a reduction in symptoms, but the reduction was twice as great, on average in those who received active dTMS. For the active dTMS group 38% of the patients showed at least a partial response to dTMS, with this number increasing to 45% at the follow-up 4 weeks after the treatment ended. The team reported that dTMS was “well tolerated” by those in the active treatment group. There were no severe adverse events such as seizures, while the most common side effect was transient mild headache during or just after treatment sessions.

Our rTMS setup is suitable for OCD treatment when using our double cone coil, that reaches deeper regions than the normal figure of 8 coils. By adding an MRI-guided neuronavigation system to a rTMS setup, placement of the TMS coil above the mPFC and the ACC is more accurately done leading to more efficient treatment results. 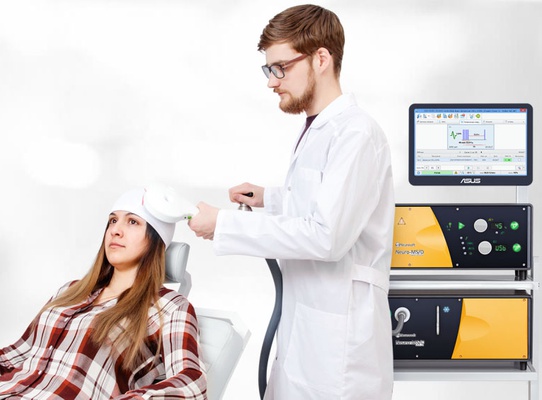